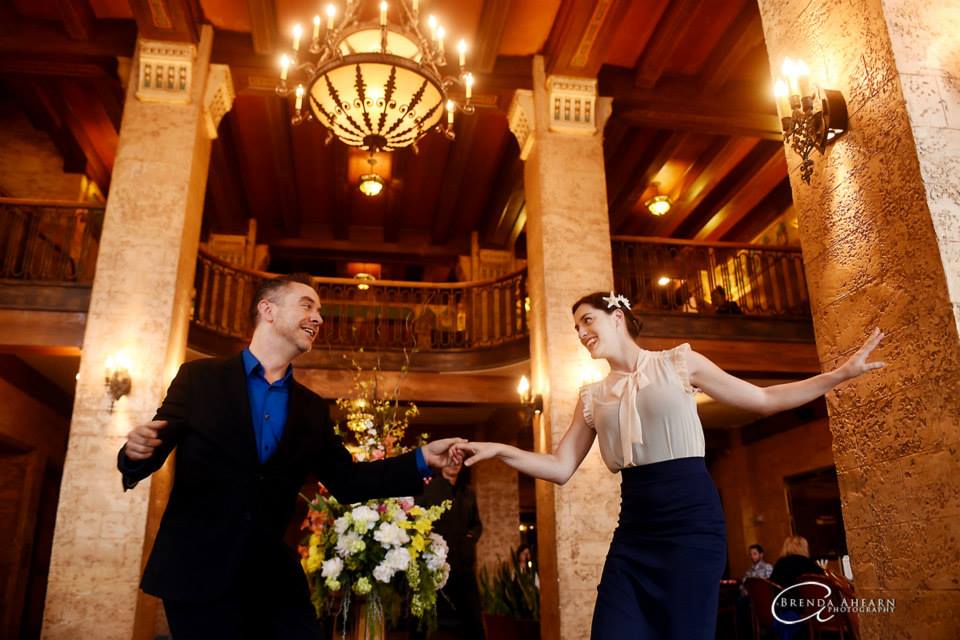 Peter & Lauren are two dynamic instructors with over thirty years of teaching experience between them.  Their elegant style and smooth dancing stand out wherever they go, and their enthusiasm for teaching has made them crowd favourites around the world. Based in Southern California, they are highly in-demand, sharing their passion for the great classic dances of the Swing Era. Their classes and workshops are acclaimed for their clarity, humour and high spirits!

Peter began swing dancing in 1993 and started teaching just one year later.  He’s taught across the country and around the world, including the Herrang Dance Camp, Camp Hollywood, Camp Jitterbug, Lindy Focus and many, many more.  He’s a noted instructor, coach, DJ, lecturer, MC and competition judge. Today, Peter counts some of the world’s top dancers and instructors as his former students. Peter’s worldwide reputation is as a highly sought-after social dancer and instructor, and his “Art of Social Dance” lecture & discussion has received global acclaim. He has also helped create several thriving venues and dance scenes over the years (Rusty’s Rhythm Club in Los Angeles, ATOMIC Ballroom in Orange County, Eastside Stomp in Seattle, and several more) which continue to thrive today. Peter’s passion for the Swing Era shines through in his teaching as well as in his daily life.

Lauren Smith has been dancing her whole life, starting when she was five years old. She began dancing Lindy Hop in 2007 when a friend brought her to LA’s Lindy Groove. From there, she started dancing almost every night of the week, competing regularly, and teaching throughout the LA area.

Lauren specializes in jazz-era dances, especially Lindy Hop, Balboa, Charleston and Collegiate Shag. She is very passionate about the preservation and instruction of the partnered jazz dances of the swing era.

She has won and placed in a number of national dance competitions, including Camp Hollywood, the Lone Star Championships, Inspiration Weekend, Le Hot Sauce, and many others. She teaches regularly around the Los Angeles area, as well as at dance exchanges and workshop weekends around the world. Lauren is sought after as a swing DJ and competition judge. Lauren uses her degree in vocal music education to bring a unique approach to classes incorporating Alexander techniques, natural musicality, body efficiency, and other dance skills.

Her goal as a teacher is to inspire her students to grow in their abilities and love of jazz dance.